I’ve been meaning to post about this for a quite some time (I’m ashamed to admit it’s been almost a year), but never late than never right?

Ok, so last summer hubby and I, with the irreplaceable help of my dad and his great ideas, built a greenhouse next to our garden. We had the privilege of access to glass recycled out of an old office building, so all we had to do was buy some wood and start designing. It was tricky because we wanted to cut as little glass as possible, so we worked around the size of glass as best as we could. Thankfully most of the panels were about 6ft. long by 1.5ft so those made up the majority of the walls. The rest of it we cut to the size we needed by scoring the glass and then breaking it off (hopefully with a nice clean edge). Note: don’t try it with tempered glass, you end up with lots of round pieces of glass everywhere. This can be a frustrating process and more than a few lost panes, but hey, it was free so we couldn’t really complain.

We laid a foundation on gravel with 4×4 pressure treated wood beams, with more 4x4s making up the corner posts, and then we assembled our walls on those. It seemed to make the most sense to build the walls in the garage and then carry them out to the foundation and attach them there.

The walls were built out of 2x4s and 2x2s that had been weatherproofed and stained, and had grooves cut through them for the glass to slide into. All in all pretty simple! Then once the frame was built it was fitted into place between it’s two posts. Repeat with the other two walls and we had something that was starting to resemble a greenhouse! 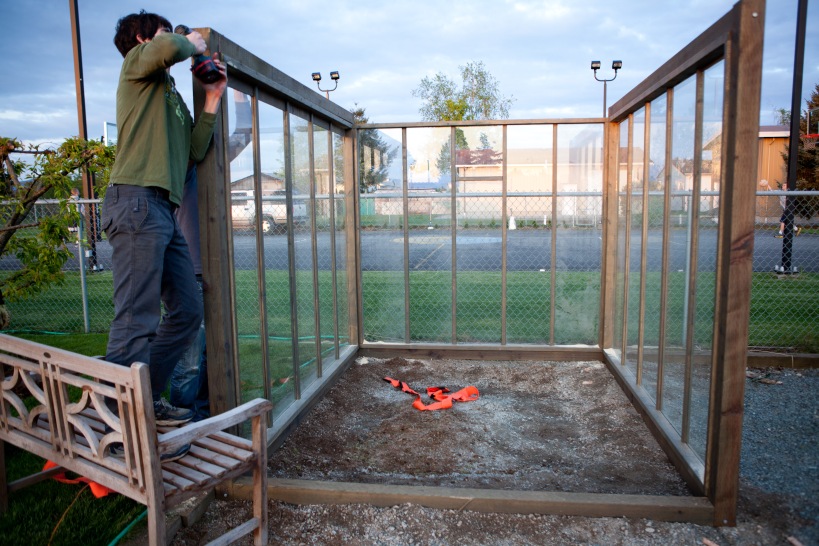 The next part was the difficult one. The roof. It was too heavy to possibly think of building it first and then sliding it up. So instead, the supporting posts were built right onto the walls, and then the small 2x2s were attached individually and the pieces of glass were pushed into their slots one at a time and then nailed in place. 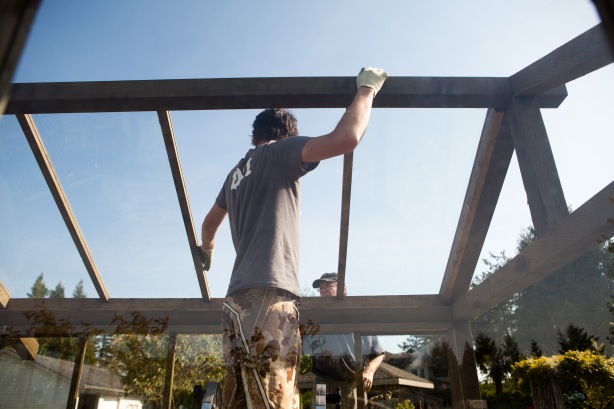 The other side of the roof was a little different as I wanted a window that could open to vent out hot air in the summer time. It’s attached to the roof with an “L” bolt that rests inside a bracket so it can swivel as shown below. Then the rest of the glass was installed as per the first side and silicone was piped into the seams between glass and wood to make it waterproof. Finally the front walls were installed, as were my double french doors that I had requested!

I have to say that I do really love my greenhouse, and I have much thanks to give to the wonderful men in my life who put it together. All I did was design the look and stain a lot of wood! But as a result of everyone’s hard work, I made a lot of great pesto and tomato sauce from all the basil and tomatoes I grew in there last summer and I can’t wait to do it again this year.

I hope this inspires you to do your own little garden project, however big or small, and I have to mention that old windows, doors, and whatever else you can get your hands on will make a great little greenhouse. I also have to say that the tomatoes are so worth it.

12 thoughts on “building a greenhouse”